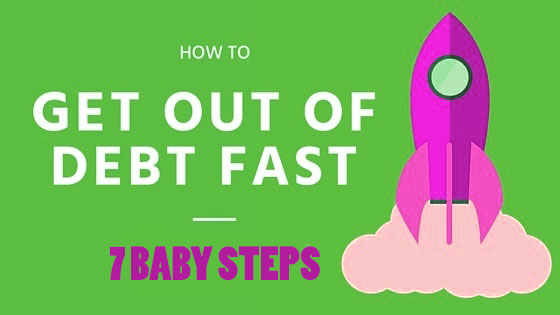 First of all, you most likely don’t know where to start to get out of debt. Do we start with a retirement? Do we start with college? How do we start getting out of debt? What about that emergency fund? When you get too many things going it one time, but have you ever noticed that nothing happens?

We broke it down into one little step at a time, that way I can chew it up. It seems so overwhelming when you take it all on at once. Taking these steps to get out of debt and that’s part of your plan you call it “The Baby Steps.”

We came up with 7 steps and over the years of twenty years of financial counseling thousands and thousands of families. We found that if they follow these steps and we’ve adjusted them and polish them about ten years ago we really settled in on this and have just driven it home with so many folks.

The first step is: Quickly get a thousand dollars in the bank, a little starter beginner emergency fund. It’s just kind of Murphy repellent. You know it just keeps all the bad stuff away because there’s a little money to keep him away. To get out of debt we’re going to work on our debts. Everything but the house.

A lot of this is behavior modification as much as it is mathematics.

By the time you get towards the bottom of this and you’re paying on your big car debt or your student loan then you’re fired up! Because you’re winning for the first time in your life with money! A lot of this is behavior modification as much as it is mathematics. So, once we’re debt free and most people can’t even imagine doing that. Debt free, but the house. Then we move on to baby step three.

Baby Step 3: Save 3-6 Months of Expenses

We go back to our little thousand dollar account and we raise it up to a fully funded emergency fund of 3-6 months of expenses. Well, that really seems overwhelming 3-6 months, when you really put pen to paper and you think “gosh, I’m going to save that much money?” We start talking about 10 or 15,000 bucks I’m going to have in savings just for emergencies. But think about how you would feel, like this will blast economic problem we’ve gone through. If you have no payments and 10 or 15,000 thousand dollars, sort of that. That’s financial peace, two words that don’t go together like airline service.

So, suddenly you’ve got money because you’re not giving it all to the bank and it really happens in about six months from the time people are debt free. It takes them about two years to get out of debt, usually that they can build up that emergency fund.

Then that brings us to baby steps four, five and six, which we do at the same time. Baby step four is putting 15 percent of our income into retirement. Which we can do, because we don’t have any payments, but a house.

Baby Step 5: Save for College

Baby step five is now we’re going to save for the kids’ college which we can do, now that we don’t have any payments but a house.

Baby step six is all the extra money we get thrown at us from bonuses or inheritance or anything that happens. We throw it at the house and people are paying off their homes using this plan in an average of about 7 years from now when we start that, which is awesome. That saves you so much in interest.

Why do you need to invest in your retirement before you invest in your kids’ college? 100% percent of the time, you are going to retire if you don’t die. Not one hundred percent of people will go to college. Only 56 percent of people that do go to college graduate. Now that’s kind of weird, so we got to think about this. Yes, we want to brainwash our kids to go to school. We want to teach them education’s important, why? Because it is, and we need to prepare for that. But we’ve got to be doing the retirement and we’re only putting 15 percent of our income in retirement. We’re not putting 30%. I’m not loading up retirement and not doing anything to college, but we’re going to do healthy retirement and then start on the kids’ college.

I’ll bet you guys are like me, when I was in college my parents made me do this evil thing called WORK! That didn’t hurt me and it didn’t hurt you either and it won’t hurt our kids.

Baby Step 7: Build Wealth and Give

The last baby step to get out of debt is “Baby Step seven”, because when your house is paid off, retirements done, college is done, there’s no debt. There’s an emergency fund. There’s nothing left to do, but become very wealthy and give give give give give! The most fun you’ll ever have with money in your life is be a giver! Go to Waffle House on Christmas Day you leave a two hundred dollar tip. Have a blast!